One aspect of reviving the XMods parts that I have involves figuring out what I need to fix to get the shorter chassis running again. I had originally taken it apart to figure out how it all worked many years ago, so I'm starting from a partial deconstruction of the chassis. At this point, I'm hoping for a bit of a refresher on the mechanics and to hopefully understand what parts I'd need to hijack or modify to get this thing back running again if the main board isn't working as intended. After a little breaking, I'm going to put it back together and power it up to see what's functioning.

Here's an example of a working chassis. This is a longer version meant for use with the 2005 Ford Mustang body. 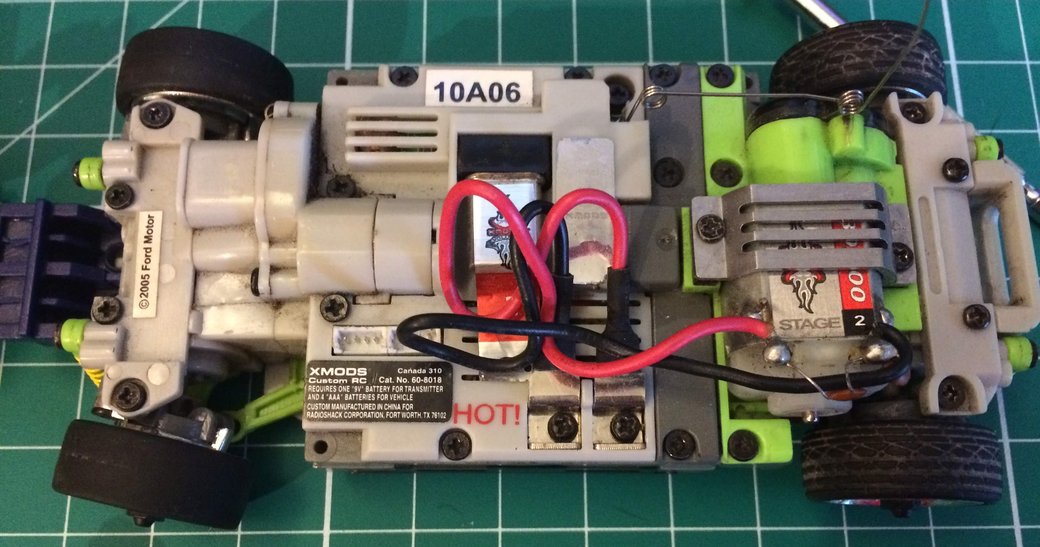 The rear drivetrain isn't too complicated, although I will need to find the right motor and gearing to get it hooked up again. I will also need to find a pair of special screws used to mount the hubs so that they can flex up and down. 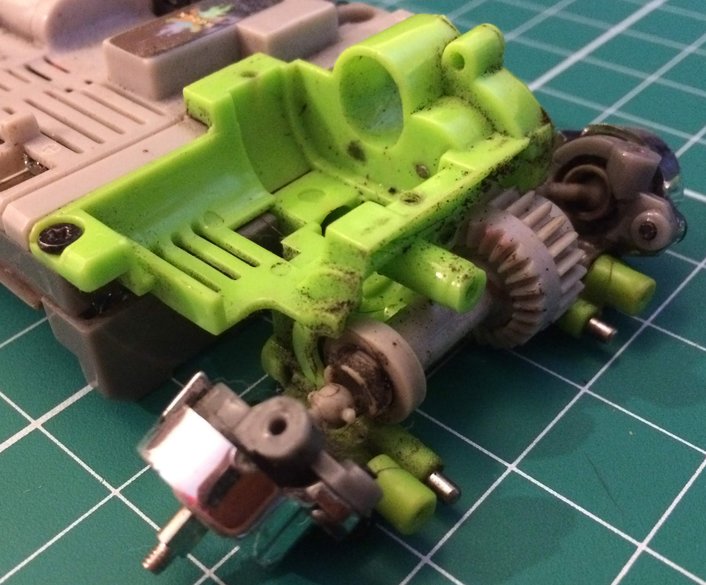 Moving to the front of the vehicle, we have a similar setup, except that the hubs also allow for the mounting of the steering rack (which itself is currently missing).

This chassis has a front differential because it has the all wheel drive kit installed. The geometry of the differential is missing an embedded gear so it can be more compact than the rear differential which is driven directly from the motor. 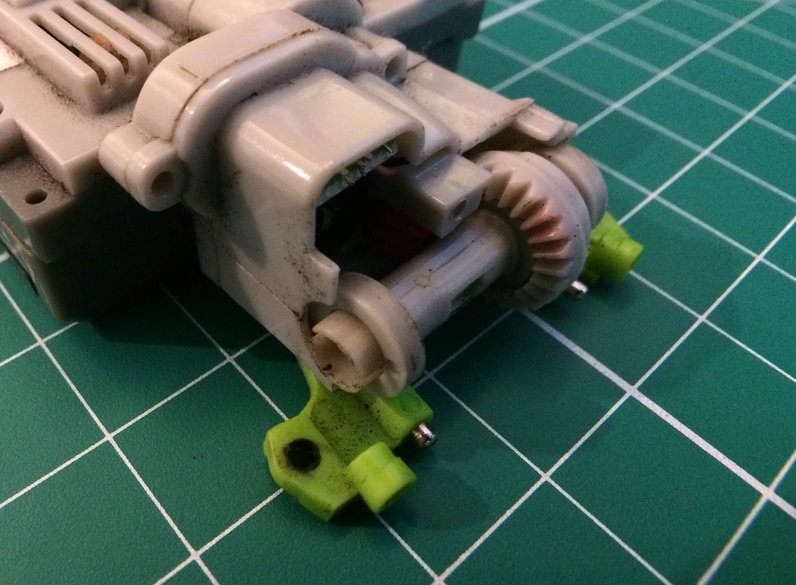 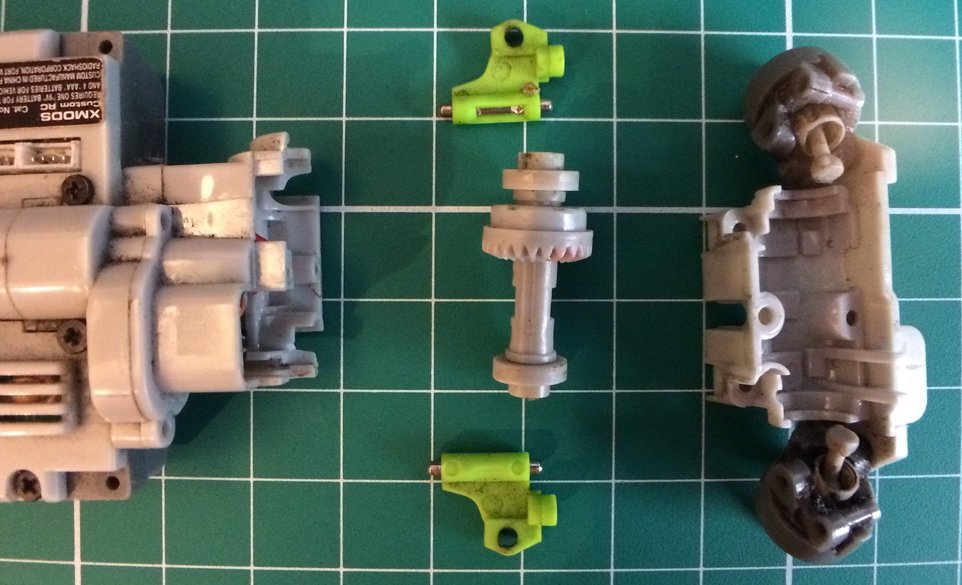 Looking inside the front differential, we can see the pinion gear at the head of the driveshaft and the steering position sensor. Perhaps the most interesting discovery of this disassembly was that the steering is performed through some sort of feedback instead of via an open-loop command to a servo. 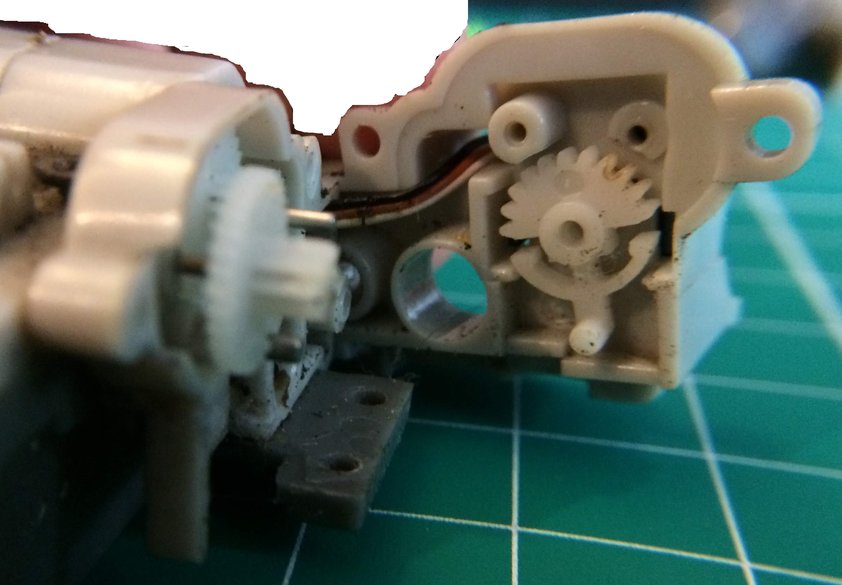 Here we can see that the steering motor goes through three reductions: two from the motor to the exposed gear and then one to the special half gear that connects to the steering position sensor. 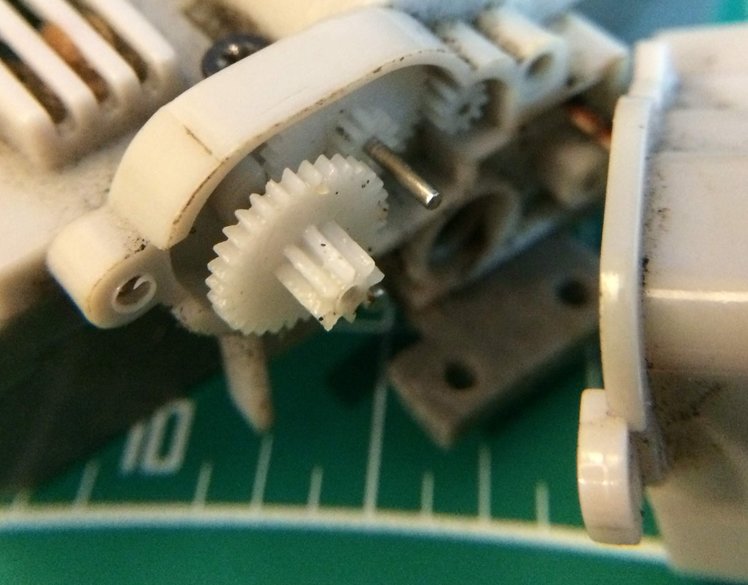 Taking a step back, we can see that the steering motor is actually molded into the chassis. It is far less exposed than the rear motor, which is designed for easy substitution. Modifications here will be more intrusive than with the drive motor, which has its leads intentionally designed for easy connecting and disconnecting to the screw-pads (bottom center). 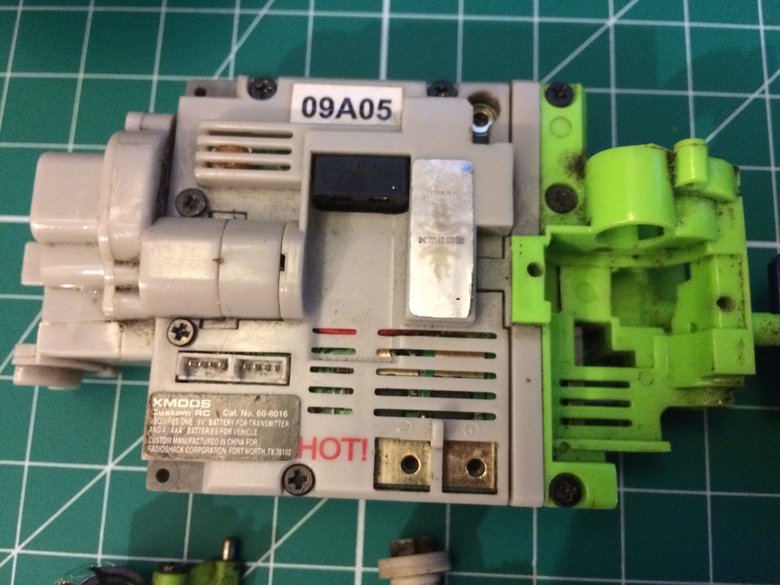 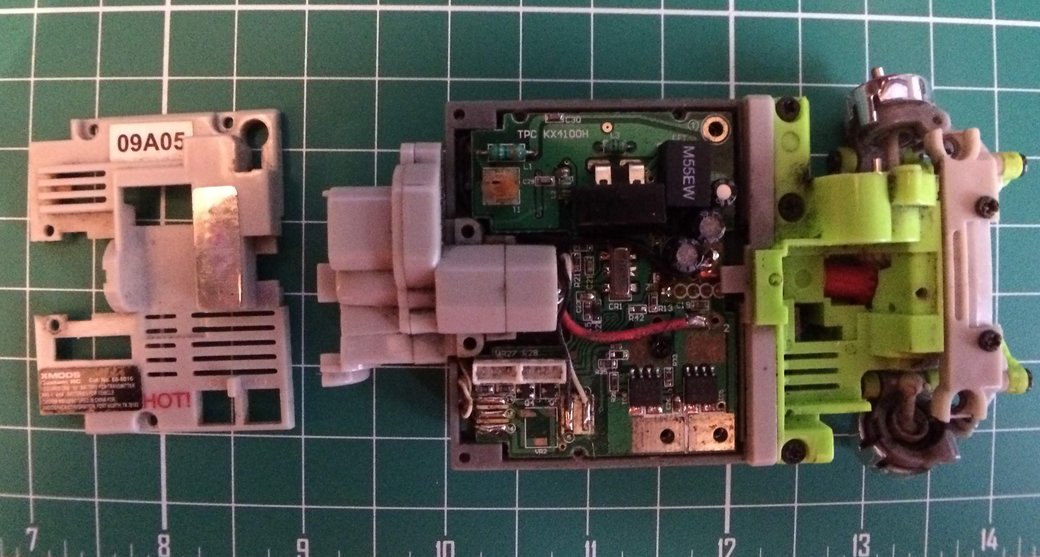 After some unscrewing and unclipping, we can finally expose the steering motor. It doesn't look as beefy as the drive motor, but it's also going through a number of reductions and shouldn't be taking as much load anyway. 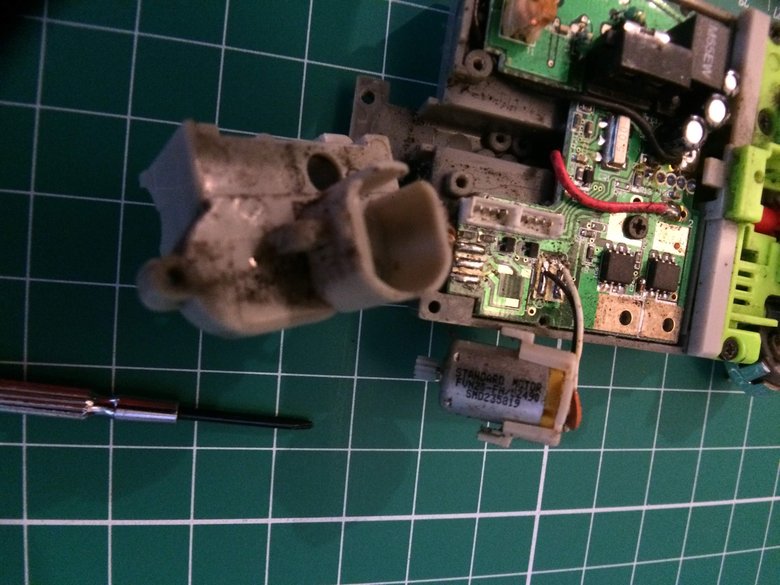 The motor itself doesn't appear to be anything special: "Standard Motor". A quick search for the designation "FVN26-FN/5Z490 SMD235819" didn't turn anything up, I'm assuming the part is a relatively generic DC brushed motor. 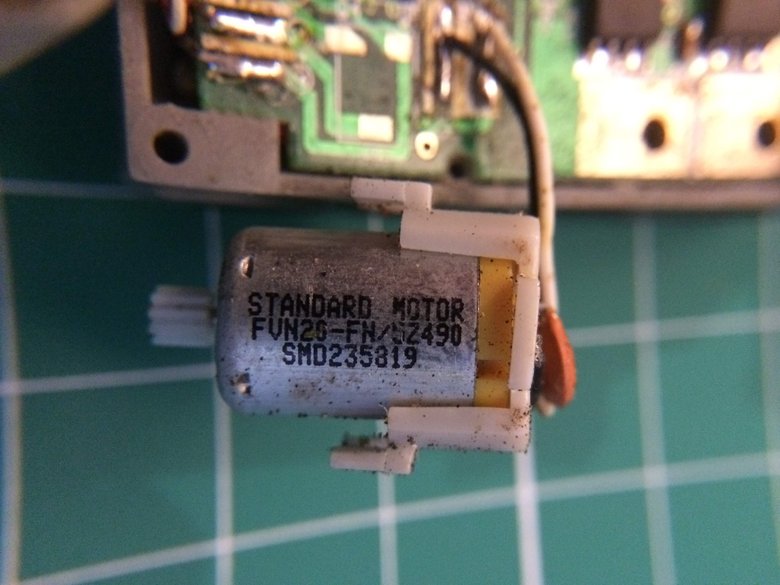 Taking a closer look at the board, a couple of the components might be identifiable:

There is a physical layout schematic for first generation XMods that may be of some help, but the design is quite different. It included multiple boards and used a servo for steering. 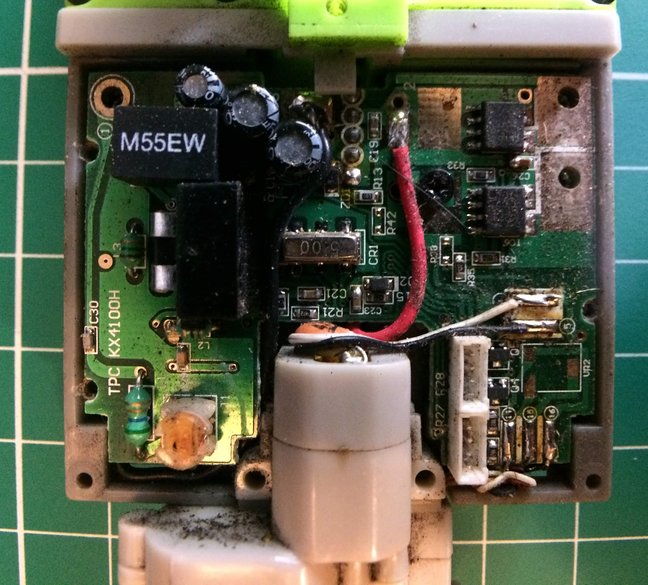 With a better close up view, I might be able to identify the drive motor FETs. 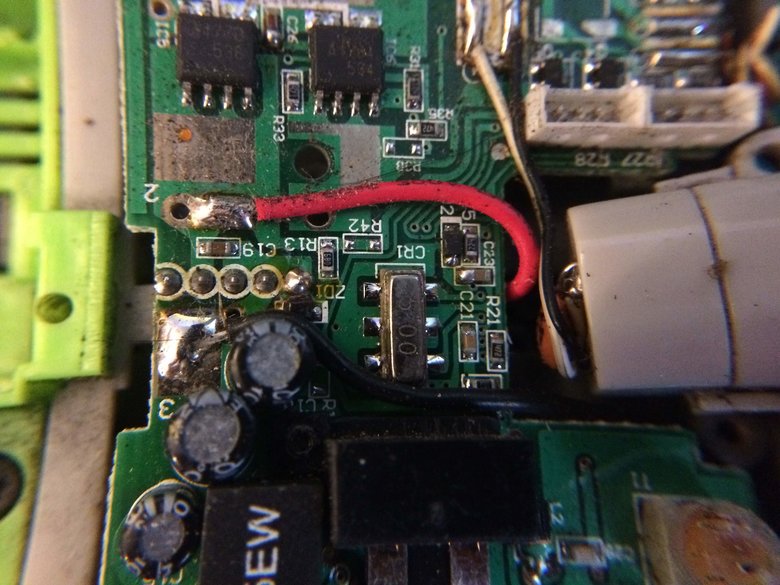 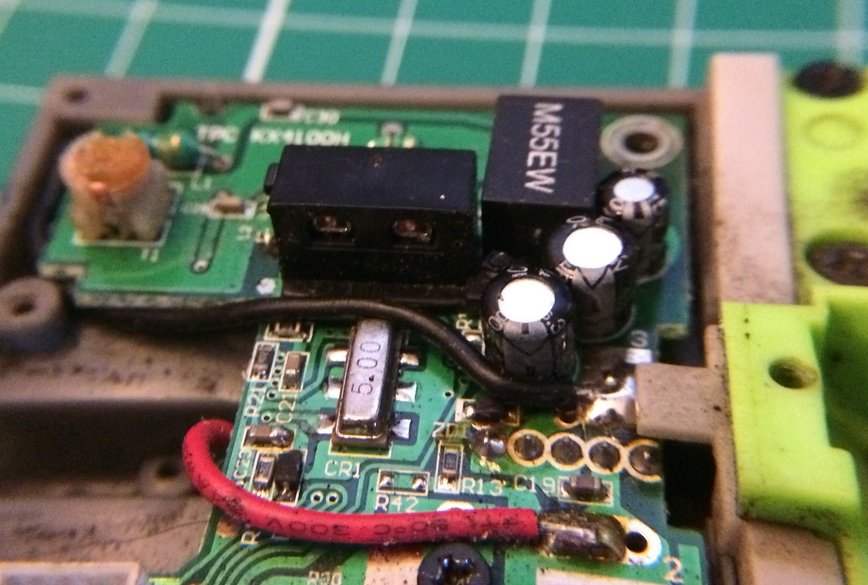